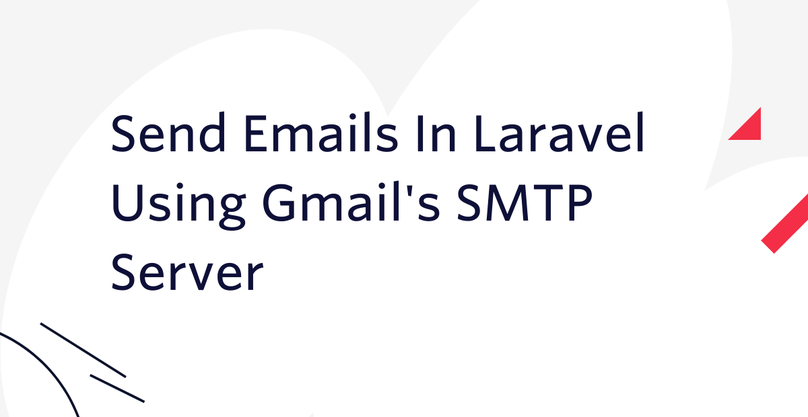 Sending email has become an essential part of modern web applications. For example, they are a great way to communicate with users, when they register, when verifying registrations, and when resetting passwords.

So in this tutorial, you will learn how to send emails in Laravel using a Gmail SMTP server.

In certain circumstances, your local server may not send emails when using the default PHP mail() method, or it may make it quite problematic to do so. In such scenarios, using a dedicated email library, such as Symfony's Mailer component, can be a practical alternative.

You could also use one of the many email drivers which Laravel supports, including Mailgun, Amazon SES, and Postmark, and of course, Twilio's own SendGrid. However, in this tutorial, you'll learn how to configure Laravel to send emails using Gmail's SMTP server instead.

That said, it's important to know that Google imposes some limitations on free accounts, e.g.,, a maximum of 100 emails can be sent per day.

This will create a fresh Laravel application in a new directory named mail_article. Next, change into the new project directory and start the application by running the following commands:

By default, the project is served on port 8000 on localhost. We can access it by entering http://localhost:8000 in the browser. You should see a page similar to the image below confirming that your project is running. After seeing that, stop the application by pressing Ctrl + C. 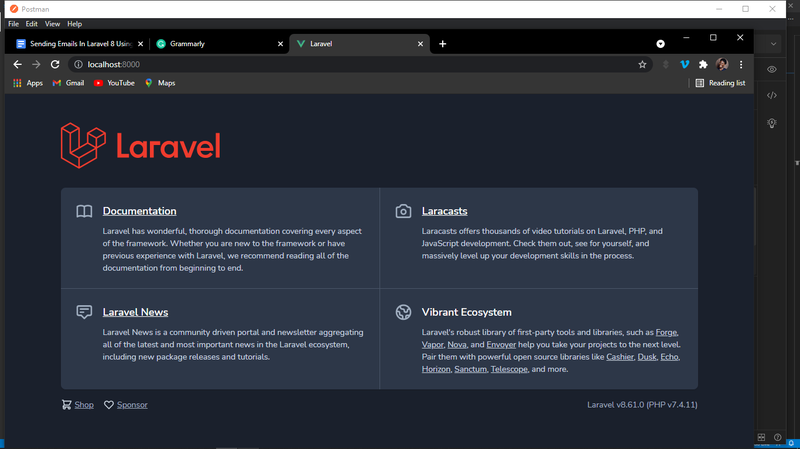 Laravel stores email configuration in config/mail.php. By default, it's set to use SMTP. We do not need to edit config/mail.php, however, because we can supply the necessary information in .env, which stores our environment variables. config/mail.php will, in turn, fetch the required details from there.

Now that the email configuration has been updated, we need to configure some security settings in our Gmail account. To do that, log in to Gmail and select "Manage your Google Account" from the profile (cog) option. Then, under "Less secure apps", select "Security", click "Turn on access (not recommended)", and toggle the option to the right of "Allow less secure apps: OFF". 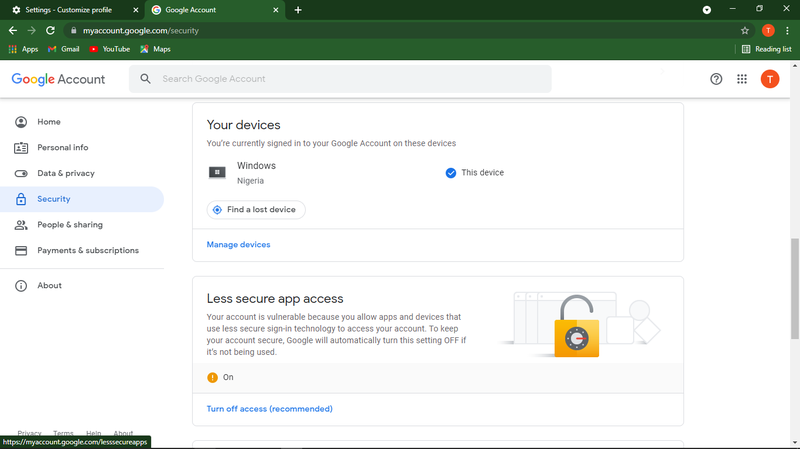 This is because, by default, Gmail won't let "less secure" apps have access to use your Gmail account.

It’s important to understand the meaning of this term. Less secure describes a class of third party applications which are fundamentally less secure than using an authorization system like OAuth to gain access to your credentials. OAuth doesn’t give third party applications access to your credentials, it only provides authorization for certain services.

Set up the model and migrations

Now that we have made the necessary configuration changes, let's add the code that subscribes a user to the newsletter.

First, create the model and database migration simultaneously, by running the command below:

Update Subscriber.php by adding the code below to the top of the file, which enables Model mass assignment.

Then, update the up() method of the migration file with an email field as in the example below

To set the application's database, in .env, update the database configuration to match the following example, replacing the placeholders with details for your database.

You may need to clear the cache, although it's not compulsory. To do that, run the following command in the terminal:

Next run the database migrations by running the following command:

Laravel provides diverse ways to support sending emails using Mailable classes, supporting both Markdown and plain text emails. We will be using a Markdown Mailable for this tutorial.

Markdown Mailables contain a mix of Markdown and Blade templates that allow you to construct your email messages with prebuilt UI elements from Laravel.

To create the Mailable (app/Mail/Subscribe.php) and its corresponding view template (resources/views/emails/subscribers.blade.php), run the following Artisan command:

Set up the controller

Next up, you need to create a controller to store the logic that manages storing the email address and sending the confirmation email to the submitted email address. To create the controller, run this Artisan command:

It will create a new file called SubscriberController.php in the app/Http/Controllers directory. With the file created, add the import statements below to import the classes which the controller will use:

Next, define the subscribe() method which will hold the business logic, by copying the method below into the class. It will receive the users' input via $request.

Next, it creates a new record of a subscriber by instantiating the Subscriber model and passing the email submitted to the create() method.

The Mailable class builds the email for us. It comes with a build method within which you can call other methods, such as from, view, markdown, and subject, which configure the various Mailable properties.

Open app/Mail/Subscriber.php and update the __construct() method as follows:

If you have no data to pass to the email, leave the __construct() method as it is.

Next is the build() method, which calls subject() to give our email message a subject.

It already has the markdown() method by default which specifies the Blade file where the components of the email can be written.

Open the Blade file resources/views/emails/subscribers.blade.php which contains all the components of the message, and update it to match the code below.

Note: This is the Blade file being targeted in the markdown() method in the build() method of the Mailable class.

Both Markdown and Blade are supported here. Although, avoid excess indentation because it can result in code blocks in Markdown. You can compose your desired message here and make use of different properties like buttons, tables etc. To know more about Markdown Mailable, read this Laravel documentation.

Set up the routes

Seeing as this is an API we are building, we'll add a new route in routes/api.php. We only need to define one since we have only one endpoint, /api/subscribe, for users to submit their email.

To define it, add the following code to routes/api.php.

Then, add the import statement to the top of the file.

It's time to test our API and confirm that everything is functioning properly. There are various ways to do so, such as Postman, or cURL which we'll be using.

First run the command below to start the application.

Run the command below in the root directory of the project, replacing <subscriber email address> with the email address that needs to subscribe.

If everything works as expected, you will see output similar to the example below:

Now check your inbox where you should see an email with the message, sender information, and email subject, etc, nicely formatted with some prebuilt Laravel UI. 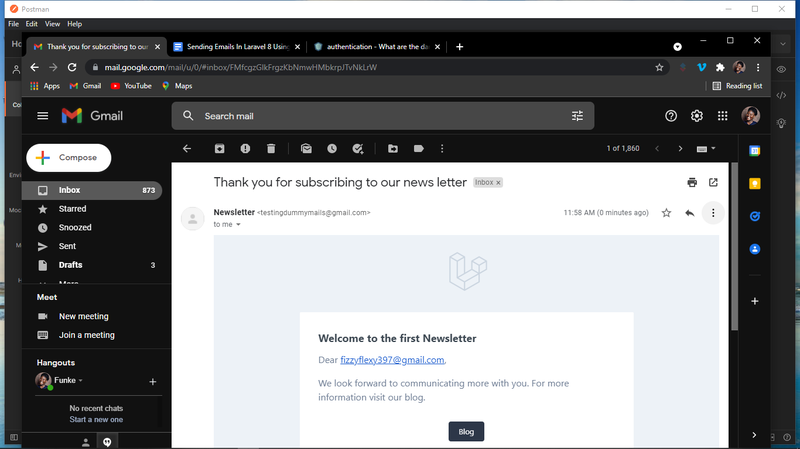 If the request is unsuccessful because the email is already subscribed, you will see an output similar to the example below:

In this tutorial, you learned how to send emails in Laravel using a Gmail SMTP Server. Mail in Laravel is a broad concept on its own but this tutorial can serve as a great starter guide. More information can be found in the official Laravel documentation. The code for this project is open-source and available on GitHub.

If you enjoyed integrating Gmail's SMTP server, why not try using SendGrid as a SMTP relay in Laravel?

Funke is a tech lover with a keen interest in building and promoting sustainable tech communities especially among teenagers and young adults. She is a backend developer, who is passionate about communal growth and has published articles on many blogs including her personal blog.

When she is not writing codes or creating technical content she is rendering humanity service to her local community solving societal issues. You can reach out to her on Twitter and Github.