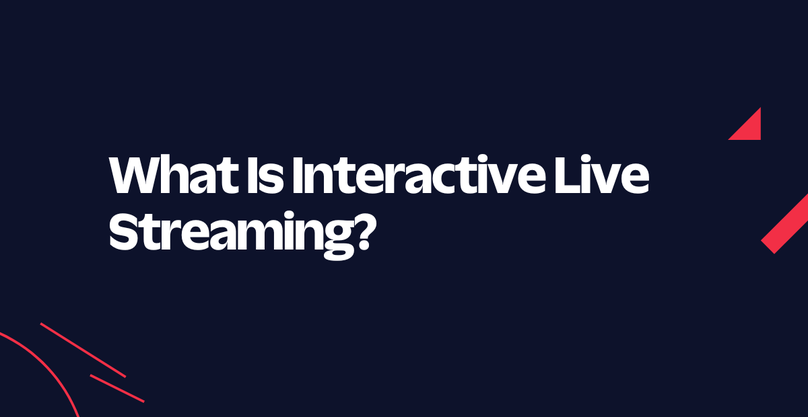 Live streaming is a relatively new technology that has garnered attention only in the last decade. Despite its very recent popularity, it's taken the world by storm and become the preferred content consumption method for many. Bloomberg reports that the “live streaming market is expected to grow at a CAGR [compound annual growth rate] of 22.4% from 2021 to 2028 to reach $4.26 billion [market size] by 2028”—and that’s rightfully so.

As live streaming continues to evolve, live interactive content is the new norm for community building and engagement. Interactive live streaming means that the audience can interact, participate, or influence the streaming experience in some way. In other words, the audience has some control or say over what happens during the stream through polls, votes, questions, chat, or general participation.

Engage directly with the audience

By creating an interactive streaming environment, you directly engage with your audience in real-time to answer questions and chat with viewers. Active engagement builds relationships and creates loyalty to your brand, leading to higher retention and returning users.

Traditional video and live streams are often a static viewing experience, with the audience just watching the content and nothing else. However, an interactive stream can turn a static experience into a dynamic experience, allowing audience members to influence and interact with the content. This exchange gives viewers the opportunity to be a part of a whole and contribute to building a strong community. Interactive streams are also more entertaining for viewers to watch.

Lastly, interactive live streams also help promote action from the viewers' side. Viewers watching live content are 67% more likely to buy tickets for an event, and 30% of viewers who’ve watched one live event, are more likely to return to the same event the following year.

Using an interactive live stream to promote an event or product can prove extremely effective in converting new customers and maintaining customer loyalty.

Companies and streamers are already redefining what interactive streaming can be. Here are some examples of live streams that incorporate unique interactive elements. 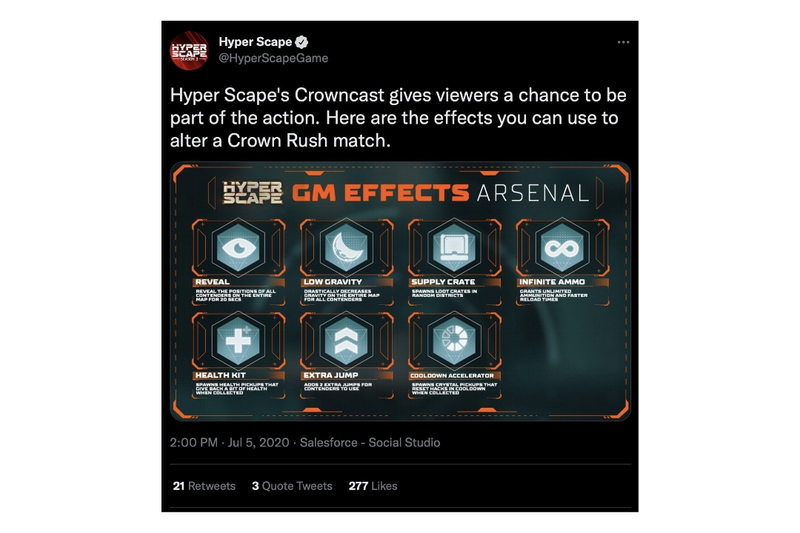 Our first example focuses on the launch of the game Hyper Scape back in July 2020. Through a partnership with Twitch, official streamers who live-streamed the game periodically received a poll that allowed their viewers to choose and vote on certain in-game perks/upgrades called game master (GM) effects. After tallying all the votes from every streamer and their audiences, Hyper Space temporarily added the GM effect with the most votes to the game, affecting everyone currently playing.

Hyper Scape was one of the first examples of allowing viewers to vote over multiple live channels and changing a multiplayer game in a meaningful way. For example, as a bonus for watching and interacting with their favorite streamers, Hyper Scape randomly rewarded viewers with access to the open beta, allowing them to play the game early. Then, on launch day, 466,000 viewers tuned in for the event, with hundreds of thousands more engaging over the next several weeks.

The chaos in the chat of Twitch Plays Pokémon

A blast from the past, Twitch Plays Pokémon (TPT) was one of the first-ever live streams to feature a direct, interactive element with the audience. Created in 2014 by an anonymous developer, TPT allowed viewers to play the game Pokémon Red by inputting commands into the Twitch chat. By typing “up,” “down,” “right,” or “left,” viewers could control the player’s movement (see above GIF) and fight other Pokémon.

As you can imagine, the stream was extremely chaotic, with some players trying to finish the game while others tried to stop the progress. Ultimately, it took 16 days and 7 hours to finally beat the game. There were 1.17 million unique participants with over 122 million commands executed during the entire playthrough. The stream peaked at 121,000 viewers at one time, with a total of 36 million viewers in total. 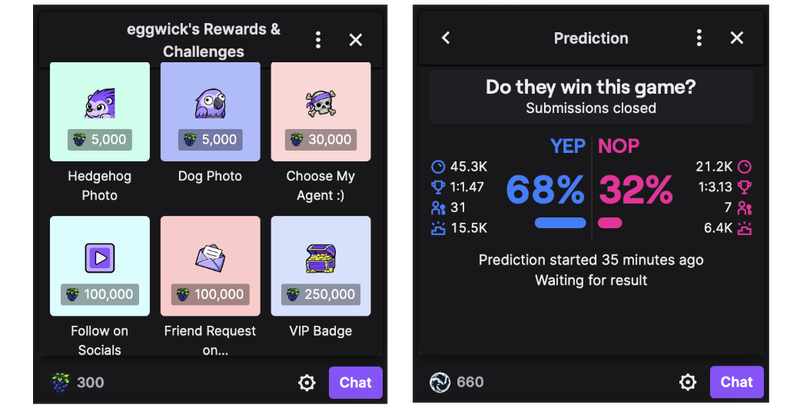 Twitch has a very unique feature allowing viewers to earn channel points from their favorite streamers. The more a viewer watches a certain channel, the more channel points they can earn. Viewers can then redeem these channel points for rewards and challenges, often set by the streamer. Some challenges include having the streamer sing a song or letting the viewer choose what character they play.

Another feature that Twitch includes is the ability to bet your points on “predictions.” Most commonly, you can use these predictions to bet if the streamer can win the game they’re currently playing, although you can use it for other predictions as well. For example, if something will happen or the chances of task completion. (Note that channel points carry no monetary value.)

These rewards and predictions reward long-time fans, build the streamer’s community, and create an interactive environment that incentivizes viewers to continue engaging with and watching their favorite streamers.

Have you ever wanted business advice from experts in their field? Lisnic does just that, connecting you directly to business experts who can provide valuable career or professional advice. These chats utilize Twilio Video and Twilio Live to host these one-on-one sessions, but Lisnic also offers large webinar formats for celebrity speakers like the co-founder of Netflix, Marc Randolph.

These live webinars utilize text-based chat, audience polls, and the ability to invite audience members to speak to create a rich interactive experience. Lisnic is a prime example showing that businesses can leverage interactive streaming elements to best serve and engage customers.

Audience members choosing what happens to Jerma on his Dollhouse Stream

The Jerma985 Dollhouse stream redefined what it means to host an interactive live stream, and he did that with a real-life The Sims game. With a fully built-out set and live production, viewers of the stream could control the actions of Jerma, a popular Twitch personality, for several hours over 3 days. In the picture above, votes determined what Jerma did next, whether sleeping, using the bathroom, or eating food. Meanwhile, a storyline slowly unfolded as different characters emerged and caused havoc.

In an interview with Polygon, Jerma mentioned that he “Look[s] to always push the boundaries of the medium [live streaming] and create the most entertaining and fun experience for my audience.” Jerma’s Dollhouse stream reached over 600,000 viewers in just the first 3 hours, with thousands more tuning in for the next 2 days. 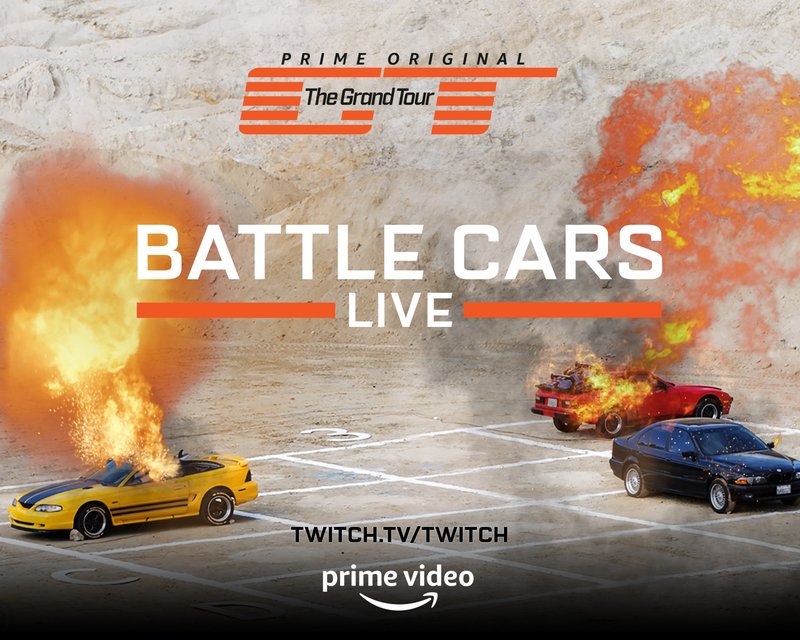 To promote the upcoming premiere of its new season on Amazon Prime Video, “The Grand Tour” utilized a unique, interactive live stream event to help create hype and garner attention for the show. “The Grand Tour” team partnered with Twitch to host Battle Cars, a live experience of the classic game, “Battleship.” However, instead of battleships, there are real cars on a grid, and viewers get to vote on which squares to “hit,” and if correct, the car explodes.

The event was a huge success with over 50,000 viewers tuning in the first 2 hours, and a total of 3.3 million viewers throughout the entire stream. Michael Benson, the Head of Marketing at Amazon Prime Video, said “[The even] was a clever way to bring the show and the audience together with an engaging activity that provided a great marketing opportunity for both Twitch and Prime Video.” 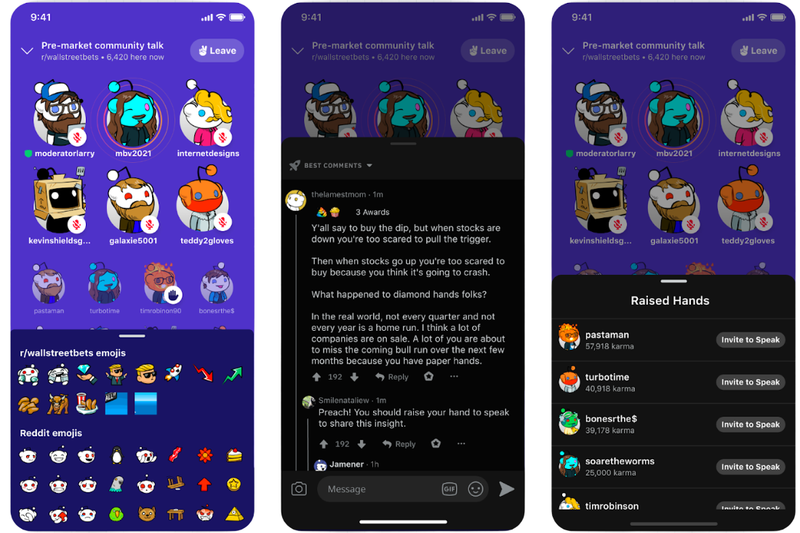 Launched in 2021, Reddit Talk (powered by Twilio Live) has proven to be an extremely effective tool to engage communities and offer an alternative communication channel for participating subreddits. Reddit Talk allows users to host or join live conversations, most often for the Ask-Me-Anything series, Q&As, or just hanging out. Typically, a moderator will start the live session and Redditors can join to listen in on the speakers, interact in the chat, or raise their hand and ask questions.

In just 3 months, Reddit Talk achieved a 250% growth in daily active listeners, with Twilio Live providing the audio capabilities and support, helping to continue the development of Reddit Talk.

Get started with Twilio Video and Live

Twilio is here to help grow your video and live streaming needs with:

Together, Twilio Video and Twilio Live enable your developers to build specialized video or streaming use cases geared toward a specific audience. Seize the opportunity to create memorable video solutions at any scale using our platform’s powerful APIs and SDKs.

Maxwell Xu is a Content Marketing Intern on the Strategic and Organic Content Team at Twilio. In his free time, he enjoys playing his bass guitar and using marketing as a way to tell stories.