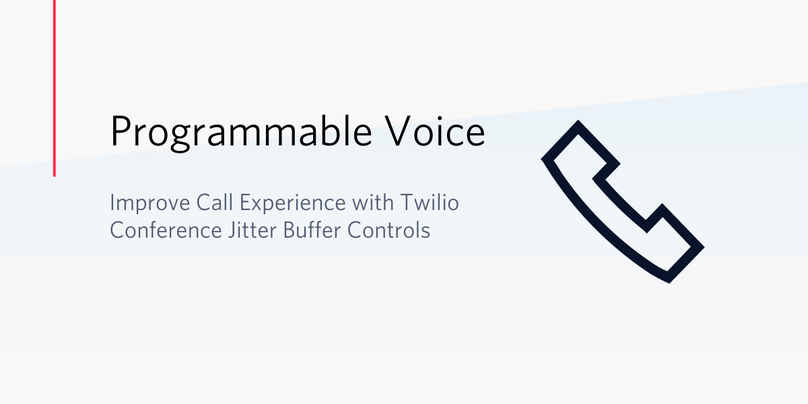 Twilio Conference uses a jitter buffer to smooth out irregularity in media packet arrival times when mixing audio for conference participants. This buffer results in fewer audio artifacts, but introduces a fixed delay for the audio of each participant.

If a participant suffers from extremely high jitter (commonly seen using applications or browsers on WiFi networks), the jitter buffer may swell to compensate, causing their media to be significantly delayed. Once the jitter buffer has grown, it will not shrink - even if the jitter is eliminated on the media stream. At sizes greater than ~250ms the jitter buffer can be perceived by the participants as audio latency.

Twilio customers have communicated their interest in gaining visibility into the jitter buffer behavior and gaining programmatic means to control it. With this in mind we have added a jitterBufferSize parameter to conferences that allows the buffer setting to be configured enabling developers to tune the behavior of their conferences and optimize the experience for participants with different network conditions.

How does it work?

A new attribute jitterBufferSize has been added to <Conference> TwiML:

The buffer may be set to small, medium, large, or off.

The small, medium, and large buffers are fixed buffer implementations with different target durations and maximum sizes. Conferences use large by default.

The off setting completely disables the buffer and mixes packets every 20ms. Packets with even fairly low levels of jitter will be completely dropped, but Twilio will add no extra latency when mixing.

The buffer value is a participant-level setting; this means the value provided for participant A does not apply to participant B, etc.

Our tests indicate that changing the size of the jitter buffer reduces latency at the expense of increased audio artifacts, resulting in robotic and choppy audio being introduced instead of delay. In our tests with the small/medium fixed buffer settings, we saw lower overall latencies, with some increase in dropped/corrupted audio throughout the call.

We validated this behavior with customers in real-world implementations as part of our private beta, so you can feel confident that the results described above map to the actual experience of your users.

Tolerance for different types of call quality issues is highly subjective and varies significantly. By exposing the jitter buffer controls, developers can tailor the jitter buffer behavior to cater to their preferences. For example, you may have one set of users who are highly sensitive to choppy or robotic audio, and prefer large jitter buffer settings to smooth out audio performance, and another set of users who would rather hear audio drop outs and degradation over latency.

Here are some general best practices we recommend:

There is no single answer for what's right for your users. But with this new parameter, applications that use Twilio conferences have the ability to programmatically make adjustments to the jitter buffer behavior, allow you to customize your implementations for different scenarios, and deliver the best experience for your users. We can't wait to see what you build!

Michael Carpenter (aka MC) is a telecom API lifer who has been making phones ring with software since 2001. As a Product Manager for Voice & Video Insights at Twilio, the Venn Diagram of his interests is the intersection of APIs, SIP, WebRTC, and mobile SDKs. He also knows a lot about Depeche Mode. Hit him up at mc@twilio.com