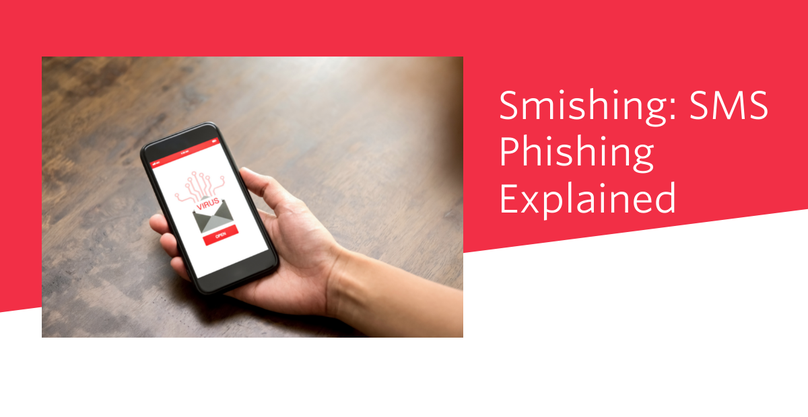 With the rise of attacks using familiar everyday tech as vectors, it's important to discuss the difference between a legitimate, bulk SMS and a well-crafted, malicious SMS designed to access your data or use your device for more nefarious actions.

In this article, we provide an overview of an increasingly common cyberattack that relies on the common usage of SMS as a platform, SMS phishing, and how it differs from bulk SMS. We'll walk through examples of SMS phishing, highlight what you should watch out for, and help you recognize legitimate SMS communications.

Phishing is a cyberattack that disguises common communication platforms, such as email or messaging services, as a weapon. The goal of this attack is to trick the recipient into believing that the message is urgent and something that they want or need.

Typically, these attacks can include:

In a web-based attack, the attacker redirects the end user to a counterfeit website it owns. Then the attacker scams the victim into providing bank details, paying a fee or charge, or entering other credentials as part of a larger attack.

If the goal is to get the user to install an application, once they click the link, the malicious payload is on the device. The device is then considered to be compromised, which provides a foothold for a larger attack (e.g., on a company’s network).

With the wide adoption of SMS, it wasn’t long before smishing, or SMS phishing, became just as widely deployed as its older brother, email. Smishing is a scam that uses SMS as the attack vector. The goal is to trick the victim into revealing account information, installing malware on their device, or paying a sum to the hackers.

Here, as above, fake information and urgency are tactics used to make the texts appear to be from a reputable organization and something that the user must act upon immediately.

This is different from bulk SMS messaging, also known as mass texting, which is a legitimate way for firms, organizations, media companies, and financial institutions to reach a wide customer base with time-sensitive alerts and notifications to subscribers. 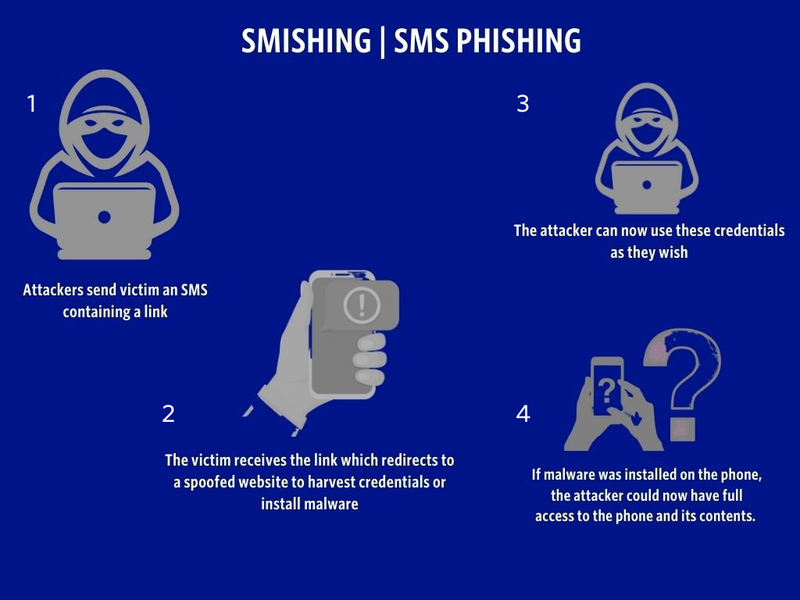 Often considered a social engineering attack, smishing intends to exploit people and our hardwired vulnerabilities: trusting too easily, acting quickly, and wanting to be helpful.

In fact, while working on this piece, I was actually sent an SMS that has all the hallmarks of a well-crafted SMS phishing attack. This will help explain how easy it is to fall victim to these sneaky attacks.

The SMS I received claims to be from the Bank of Ireland or "BOI," and everything looks legitimate enough. The spelling is correct, and I’ve received similar notifications from other businesses. So this isn't something I should be concerned about, right? 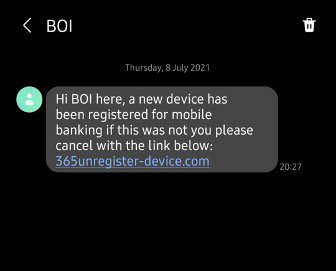 How to defend against SMS phishing

With standard phishing via email, you can check the email headers and actually hover over the links so that you can see if they're safe. However, with SMS phishing, you don't have those options.

Here are some ways to defend yourself against smishing:

Remember, if something is too good to be true, it usually is. Bob from accounting won’t send you an Apple gift card via an email, and it’s unlikely that a financial institution will send you an SMS with an unfamiliar link to update your account details.

SMS phishing vs. legitimate SMS messages: How can I tell the difference?

Let’s conclude by quickly comparing a standard series of Twilio SMS messages and (to the right) a scam message claiming to be from the delivery company DHL.

Consider that you received this message on your phone but weren’t expecting a delivery from DHL. Should you click and confirm? No. There are a few things in this image that should tip you off. 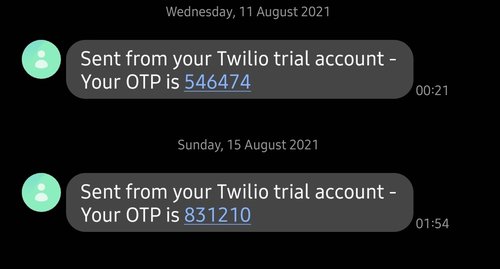 This is an example SMS from Twilio. The user received a verification code as they logged in, followed by another message to notify them of a password change.

In a world that's more and more online than ever before, it's important to stay aware of how something as amazing as SMS can be used against you. While bulk SMS is a legitimate method of sending large quantities of texts to contacts, it's important to be wary of texts from unfamiliar companies.

To recap, the SMS phishing key takeaways are:

Like all social engineering attacks, the attackers rely on the human element, so be vigilant. It's a lot easier to hack people than to hack computers or phones. We hope the above will help you stay safe out there.

To set up bulk sending for your business, check out Twilio’s Programmable Messaging API and use the resources below to get started.