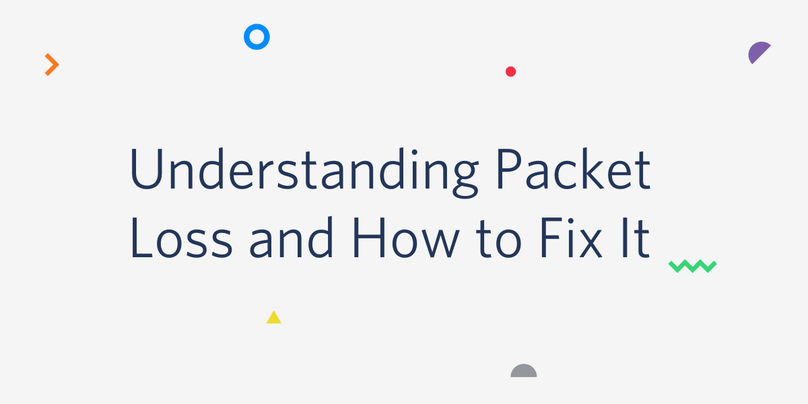 Have you ever had a video call with someone when every other word is cutting out, and the video is moving in slo-mo? “Hey - are - today? - you - help - anything?” Leads to really productive conversations…

Or how about when you play a video game, like Fortnite, and you have the target aimed perfectly at your opponent, but nothing happens to your opponent. Instead, you’ve lost your life, and all your weapons are up for grabs. Both instances could be the effect of packet loss.

What is a data packet?

To understand packet loss, it’s important to first know what a data packet is. When data is transmitted across the internet, the Transmission Control Protocol/ Internet Protocol (TCP/ IP) breaks down the data into smaller chunks called packets to make it easier to transfer. Once all of the data packets have arrived at the destination, the data packets are pieced back together.

For example, when you send something as simple as an email, it’s broken down into data packets to be sent to the recipient. The data packet is divided into 3 parts:

What is packet loss?

Now that you understand the makeup of a data packet and how it functions, where does packet loss come in?

Packet loss is when a data packet does not make it to its destination.

Let’s think about it in terms of driving. You and a group of friends are driving to the same concert in 3 different cars. Two of the cars decide to take the highway to get to the concert. The other car takes the city streets instead. There’s an accident on the freeway causing a major delay, and one of the cars gets stuck in the traffic. While 2 cars made it to the concert, the 3rd was unable to arrive in time.

Traffic on the network, called network congestion, is often what causes packet loss. If the packets containing the payload and the trailer arrive, but the header doesn’t make it in time, the entire packet is unreadable and is therefore lost.

Packet loss in TCP vs. UDP

There are two main protocols that data is transmitted over: TCP (mentioned above) and the User Datagram Protocol (UDP). The TCP requires an established connection before it can transmit traffic. It will also go back for any packets discarded during periods of high latency and resend the packets until the packets arrive at their destination. This makes TCP very reliable and helps load a website or send an email.

However, VoIP, live stream, and video gaming rely on real-time data transmission where every millisecond counts. TCP’s requirements to establish a connection and resend data packets often result in high latency for platforms that need real-time data. This is where the User Datagram Protocol (UDP) comes in. The UDP does not require a connection, and it will not resend data packets if there are errors. UDP’s data transmission time is much faster because UDP is connectionless, making it better suited for industries like VoIP and video games.

For more information on packet loss in TCP vs. UDP, check out this article.

There are a variety of reasons that could explain why you are experiencing packet loss. Network congestion tends to be the most common, but it’s worth ruling out the other possible causes.

Think about the last time you had multiple people using your wifi. Maybe one person is having a Zoom call for work, another person is checking their email, someone is streaming on Netflix, and another is watching TikTok videos on their phone. That’s a lot for one home network to handle. When there are too many people making requests over the Internet, the data packets get backed up (like the freeway at rush hour). The data packets then get lost, dropped, or don’t arrive in time.

If the end-user is using an older model of a computer or phone, this can also lead to latency and packet loss because the user does not have the memory to process the data requests or return the information to the requestor.

Malfunctioning software could be causing packet loss. When was the last time you updated your software? If it’s been a while, there could be several bugs that have been patched in the updates.

If your business sees a sudden and severe increase in packet loss, it could be from a Denial of Service (DoS) attack. In a DoS attack, hackers overload the system with requests causing the network to become so congested that it crashes. In particular, there’s a packet drop attack where hackers tell routers to drop packets to degrade the quality of the connection.

This is an extreme circumstance, and it’s much more likely that your packet loss is caused by one of the other reasons above.

How to fix packet loss

When it comes to fixing packet loss, there often isn’t one straightforward answer. It will likely take some trial and error for you to pinpoint why the packet loss is occurring. Here are a few things you can do to get started on your search.

As simple as it sounds, sometimes the turn-off and turn-on-again method is the most effective. Give your modem, router, and computer a chance to reset by turning everything off and restarting. Try starting with this method because it’ll help you narrow down what may be the cause of your packet loss.

Your wireless headphones, speakers, mouse, and keyboard could be interfering with your connection. Turn off any Bluetooth devices that you’re not using to avoid static.

If restarting does not work, switch from wifi to an ethernet cable. A wired connection tends to be more stable than wireless, making it less likely for data packets to get lost during transmission.

If the reason for packet loss is network congestion, it may be worth increasing your bandwidth. This will allow more people to make requests simultaneously while avoiding congestion.

Your Quality of Service (QoS) settings allow you to prioritize the areas that need the traffic the most. This way, if there is network congestion, the most important parts of your business will receive more traffic than other components.

Have you continually chosen “Remind me tomorrow” for your computer’s software update? Closing out all of your tabs and installing software can be a pain, but if you’re experiencing data packet loss, this could be the answer to your problems.

You can also check the Task Manager application on your computer to see if one application or software, in particular, is using up your bandwidth. This is a good way to see what may need updating.

Set up a VLAN for voice traffic

If your company is experiencing packet loss and has multiple locations or has grown rapidly, it may be worthwhile to set up a virtual local area network (VLAN). A VLAN is a group of devices (computers, phones, etc.) that are not in the same geographical area but share a connection to specific servers.

Getting ahead of packet loss

When it comes to packet loss, there isn’t a one-size-fits-all solution. Between network congestion, outdated hardware, and overloaded devices, there’s a plethora of reasons that your VoIP call is cutting out every other word.

To get ahead of packet loss and any other potential network connectivity issues, we recommend tracking packet loss, latency, and jitter so you can proactively fix any issues with your call quality before it becomes a problem for your customers.

Twilio’s Programmable Voice offers Voice Insights so you can track your call performance and quickly remedy customer pain points. It provides a detailed analysis of metrics like who hung up first, the post-dial delay, jitter, and, of course, packet loss. Get started with a free Twilio account to try it out.

For more information on packet loss and Voice Insights, check out the following resources: