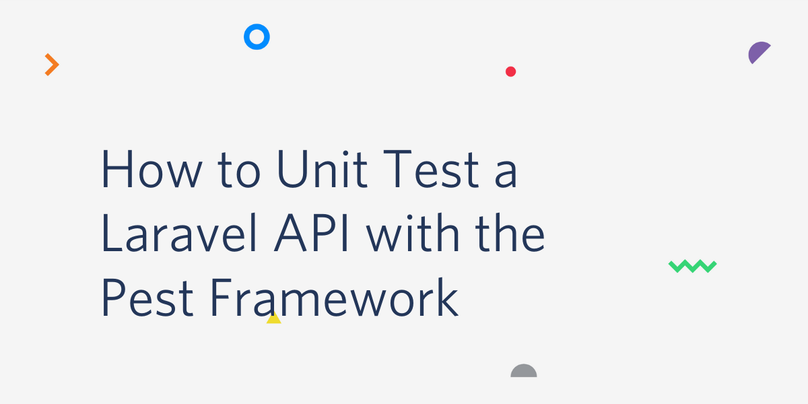 Pest is a new testing PHP Framework developed by Nuno Maduro. While Pest itself is built on top of PHPUnit, the popular and widely adopted PHP testing framework, Pest aims to provide a better experience for writing tests. The philosophy is simple. Keep the TDD experience simple and elegant by providing expressive interfaces.

In this tutorial, we’ll be looking at how to get started using Pest in a Laravel project. Using the test-driven approach, we’ll be building a simple to-do application that allows you to create, edit, update and delete tasks.

There are different ways to set up a new Laravel project. You can do so via the Laravel installer or by using Composer. For the sake of this tutorial, we’ll be using Composer.

Run the following command in your terminal:

This will set up a new Laravel project for us in the pest-todo directory.

Now that we’ve set up a new Laravel project, there are a couple of additional steps we need to carry out to set up Pest with Laravel. Type cd pest-todo to change into the new pest-todo directory, and then run the following command:

Next, we’ll be installing the Pest Plugin for Laravel. To do that, run the following command:

Once the plugin has been installed, run the following command:

This will create a Pest.php file in the tests directory. The Pest.php file is autoloaded automatically and serves as an ideal place to recursively bind helper classes and traits to your tests. Laravel comes bundled with some example test files based on PHPUnit. Let’s change those tests to make use of Pest instead. Head over to the tests/Feature directory and take a look at the ExampleTest.php file. Here’s what it currently looks like:

To migrate this test to the corresponding Pest implementation, replace the content of the file with the following code:

Much cleaner right? We’ve reduced this ExampleTest file from about 20 lines of code to just 2 lines while testing the exact same thing and producing the same result. That is, it visits the root URL at ‘/’ and asserts that an HTTP status code of 200 is returned.

Pest provides two functions for writing tests - test() and it(). Both functions accept a test description as the first argument and a closure that contains the test expectations as the second argument. They share the same syntax and behavior and you’re free to use either one you find fitting. I personally prefer using it() since they make your test cases read like a complete sentence.

Similarly, let’s make the ExampleTest.php file located in the tests/Unit directory use Pest as well. Replace the contents of the file with the following code:

Next, use the following command to run the test suite:

All tests should be passing as seen in the image below.

Our application is going to have a single Model called Todo. Laravel provides a handy command for generating a Model, Migration, and Controller for an entity all at once. To do that run the following command:

A new migration file is created in the database/migrations directory at [TODAYSDATE]_create_todos_table.php. Next, add the following code to the up() method within the migration file:

Each to-do task will have a name attribute as well as a boolean completed attribute, with a default value of false. Next, edit the App/Models/Todo.php file with the following code:

Here, we assign the name and completed attribute of the model to be mass-assignable.

Laravel model factories provide a convenient way of seeding the database with data. This is very useful when it comes to testing. Run the following command to create a factory class for the to-do model:

This will create TodoFactory.php for us in the database/factories directory. Edit the definition() method within the file to return an array similar to the one below:

The definition method returns the default set of attribute values that should be applied when creating a model using the factory.

Now that we’ve done all the necessary setup and configuration, we can get started with writing the tests. These tests are required to have a functioning application and will provide the corresponding implementation to make sure all the tests pass.

This will create TodoTest.php in the tests/Unit directory. Replace the file’s code with the following code:

At the top of the file, the uses() method binds the TestCase class and the RefreshDatabase trait to the current test file. The base TestCase class is provided by Laravel and provides helper methods for working with the framework while testing. The RefreshDatabase trait takes care of migrating and resetting the database after each test so that data from a previous test does not interfere with subsequent tests.

Now, let’s go over what each test is doing:

To run the test suite, run the following command:

The test suite should be failing since we have not implemented any of the features. 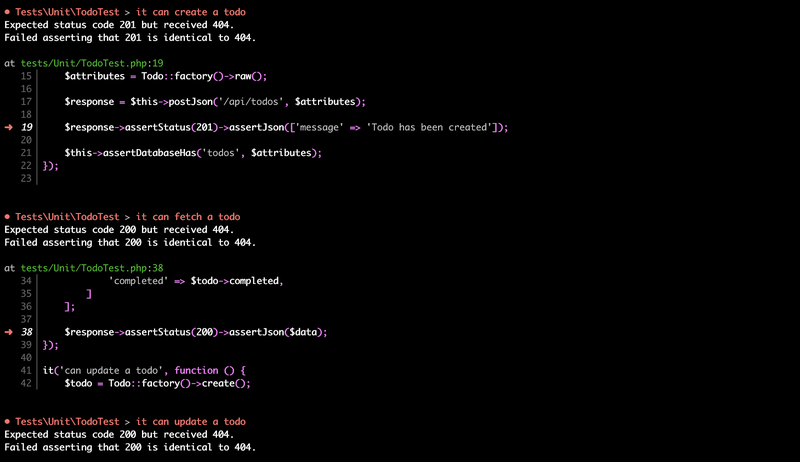 Let’s provide the corresponding implementation of the tests we’ve written so far. Head over to the TodoController.php file in the app/Http directory and replace the file’s code with the following code:

Next, add the following routes to the routes/api.php file:

Now that we’ve provided all the corresponding implementations for the tests, we can go back to running our tests and they should all be passing now. Run the test suite again with the following command:

In this, the second part in the series, you'll learn how to use Memcached with PHP to improve the application's performance.

Build Your Own Weather Station With PHP, Python and a Raspberry Pi

Learn how to create a small weather station with a Raspberry Pi, PHP, Python, and DHT11 sensor, for under $100.00.