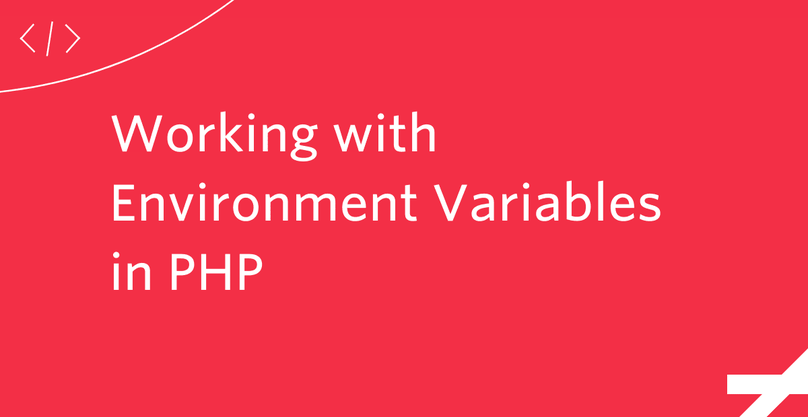 Environment variables are an excellent way to configure PHP applications because they keep the application’s settings outside of the code. By doing this, it's easier to prevent secure credentials from being exposed, maintain applications, and use applications across multiple environments.

In this tutorial, you're going to learn about some of the many ways in which environment variables can be set and retrieved in PHP applications. That way, your application can access all the information that it needs, such as API keys, uploaded files, query strings, and form data.

One of the most common ways that environment variables are accessed in PHP is through the use of Superglobals. These are built-in, predefined variables, available in all scopes. Initialised by the PHP runtime, they organise PHP's environment information in a (mostly) logical and efficient way, so that you only need to consult one array to retrieve the information you need.

That said, there are some things to be aware of.

Differences between SAPI/CGI, and CLI environments

In addition to the variables_order directive, the environment also plays a part in what information is set in the Superglobals. Specifically, if your application is running using CGI, FastCGI, or SAPI, then $_SERVER, in addition to the normal variables, will be populated with environment variables. Alternatively, if you're using the PHP CLI, then only $_SERVER will be set.

You can see examples of its usage below.

As with PHP's Superglobals, there is a catch to using this function. Quoting the function's documentation:

Please be aware that getenv() is not thread safe.

If you're using Apache as your web server, then you have one extra function that you can use: apache_getenv(). This function retrieves an environment variable set in the Apache process. You can see an example of using it below.

It's important to stress that — regardless of where data comes from, whether it comes from one of PHP's Superglobals, a web server configuration, or an operating environment — do not implicitly trust it! Environment variables should be filtered and validated just like any other data that is external to your application.

Setting them in the environment

Before you start your web server or execute your PHP script, you can set environment variables in the current environment.

If you'd like to learn about setting environment variables in greater depth, Dominik Kundel has written a detailed blog post about it.

If you're using one of these three operating systems or a variant such as BSD, then there are three scopes for which you can set an environment variable:

You can see examples of all three in the code below.

Setting environment variables is a little different in Microsoft Windows. You can either set them viathe Control Panel, or you can set them in the command prompt or PowerShell console. There are examples of the latter two below.

If you're using Docker, you can set environment variables in Dockerfiles using the ENV command, as in the example below.

If you're building a multi-container configuration using Docker Compose, you can set environment variables in docker-compose.yml using the environment key, as in the example below.

There are a number of other ways to set environment variables when working with Docker, which you can read about in the Docker documentation and the Docker Compose documentation.

Variables set in this way are also available to processes invoked by that script, and are only available by calling getenv().

You can see an example of both functions in the code below.

Please be aware that putenv() is not thread safe.

Using apache_setenv() Similar to putenv(), is apache_setenv(). This function sets an Apache process-specific environment variable. Naturally, this function and its complement are only available when using Apache. You can see an example of using it below.

If you're using NGINX as your web server, you can use the fastcgi_param directive to set an environment variable. The directive takes a case-sensitive name and value, which must be quoted if it contains spaces.

These variables are available via getenv(), and in the $_ENV and $_SERVER Superglobal arrays.

The directive takes a case-sensitive name and value, which must be quoted if it contains spaces. If no value is provided, the variable will be initialised to an empty string.

Unlike using fastcgi_param in NGINX, environment variables set using SetEnv in Apache (or one of the related functions) are only available in the $_SERVER Superglobal.

While each of the above ways have their advantages, there are a couple of disadvantages to bear in mind:

An alternative approach, one that's gained significant traction in PHP over recent years, is using dotenv files, named after the de facto file name: .env. These are plain text files that define the environment variables required for an application to work as a list of key/value pairs.

You can see an example below.

Assuming that the example above was the .env file for our project, we could use a package such as vlucas/phpdotenv, which reads .env files, by default and adds the variables defined in them to the $_ENV and $_SERVER Superglobals.

To do that, we'd first install the package as an application dependency by running the command below.

Then, we'd use the package to load environment variables, as in the example below.

It's important to be aware that .env files must not be stored under version control!

If that happens, all of the security benefits of using dotenv files are lost because any sensitive data contained in them is then available to anyone who can access the repository. That's why it's common to exclude them from version control, such as by adding .env (and variations of the filename) to a project's .gitignore file when using Git.

That's how to work with environment variables in PHP

Help Those Helping Others

In this tutorial, you'll learn how to build an application to help anyone quickly donate to charities and nonprofits using Slim Framework, Vue.js, and Tailwind CSS.

In this tutorial, you will build an app that helps you learn the Maasai language in an easy and fun way with WhatsApp.

Pub/Sub in Laravel - An In-depth Understanding

In this tutorial, you will learn about Pub/Sub, a message-driven software design pattern and how to implement it in Laravel.

Build Your Own URL Shortener With PHP and PostgreSQL

In this tutorial, you will learn how build your own URL shortener with PHP and PostgreSQL

In this article you will learn how to develop an application with Svelte, Webpack Encore, and Symfony that can interact with your Twilio message history.