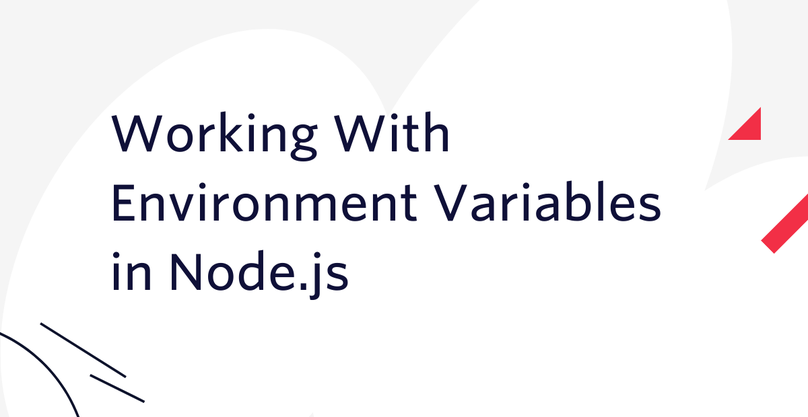 With just a few lines of code, you can simply run a Node.js application straight from the terminal and use Twilio to send and receive text messages with Twilio Programmable SMS.

The basics of environment variables in Node.js

Node.js is one of the most talked about frameworks in the web development community since Rails. While still very young, Node.js has shown itself to be fast, highly-scalable, and efficient. The reason for this is due to its event-driven, nonblocking input/output structure.

Combining it with Twilio makes building awesome telephony apps really easy. So if you wanted to send an SMS, for example, you’ll need to install Node.js and the Twilio Node.js module.

Another great feature of the Node.js language (and its modules) is that it has a neat way of working with environment variables, which many cloud hosts (such as Heroku, Azure, AWS, Now.sh, etc.) use. This opens up an array of ways to configure different aspects of your Node.js application. So while hosts will set a PORT variable that specifies on which port the server should listen to, modules might have different behaviors (like logging) depending on the value of the NODE_ENV variable.

We’ll review a few tricks and tools when working with environment variables in Node.js in this blog.

First things first, we need to ensure that we have a Node.js environment. We’ll then take you through the basics of setting up Node.js for use with Twilio on a Mac. This will include installing npm on a Mac and getting the environment ready for a Twilio project.

How to check if Node.js is installed

You can check if you already have Node.js installed on your machine by opening up a terminal and running the following:

If you don't have Node.js installed, you’ll see something like the following:

The following steps will show you how to install Node.js:

Once the installer is complete, you can then ensure Node.js will run “node -v” in your terminal—you should get the current version number as shown above.

If you don't see the installed Node.js version, you may need to relaunch your terminal.

To ensure the installation is correct and running “npm -v,” look for a confirmation of the install via its version.

Now your Mac environment is ready to install the Twilio module so that Node.js scripts in the current directory can use it.

If you want to take a peek at the object, run the the Node.js REPL with “node” in your command line and type:

This code should output all environment variables that this Node.js process can pick up. To access one specific variable, access it like you would any property of an object:

Here, you’ll notice that the value of PORT is undefined on your computer. Cloud hosts like Heroku or Azure, however, use the PORT variable to tell you which port your server should listen to for the routing to work properly. So the next time you set up a web server, you can determine the port to listen to by checking the PORT first and giving it a default value after:

The highlighted line will take the value of the PORT if it’s available or default to listening to 3000 as a fallback port. Try running the code by saving it in a file like server.js and run:

The output should be a message saying, "Server is listening on port 3000." Stop the server with Ctrl+C and restart it with the following command:

The message should now say, “Server is listening on port 9999.” This means the PORT variable has been temporarily set in front of the node for this execution by PORT=9999.

Since process.env is a normal object, we can set/override the values very easily:

The code above will set or override the value of MY_VARIABLE. However, keep in mind that this value is only set during the execution of this Node.js process and only available in child processes spawned by this process. Overall, you should avoid overriding environment variables as much as possible and just initialize a configuration variable, as shown in the PORT example.

If you develop multiple Node.js projects on one computer, you might have overlapping environment variable names. For example, different messaging apps might need different Twilio Messaging Service SIDs, but both would be called TWILIO_MESSAGE_SERVICE_SID. A great way to achieve project-specific configuration is by using .env files. These files allow you to specify a variety of different environment variables and associated values.

Typically, you don’t want to check these files into source control. So when you create one, just add .env to your .gitignore file. With a lot of Twilio demo applications .env.example files, you can then copy them to .env files and set the values yourself. Having an .env.example or similar file is a common practice if you want to share a template file with other people in the project.

How do we load the values from this file? The easiest way is by using an npm module called dotenv. Simply install the module via npm:

Afterward, add the following line to the very top of your entry file:

This code will automatically load the .env file in the root of your project and initialize the values, skipping any variables already preset. Be careful not to use .env files in your production environment, though. Instead, set the values directly on the respective host. So you might want to wrap your load statement in an if statement:

With this code, we’ll only load the .env file if the server isn’t already in production mode.

Let’s see this in action. Install dotenv in a directory, as shown above. Create an dotenv-example.js file in the same directory and place the following lines into it:

Afterward, create a file called .env in the same directory with this content:

As you can see, the value was loaded and defined using dotenv. If you rerun the same command with NODE_ENV set to production, you’ll see that it’ll stay undefined.

Now the output should be:

If you don’t want to modify your actual code, you can also use Node’s -r argument to load dotenv when executing the script. Change your dotenv-example.js file to:

Now execute the file as you normally would:

The script should output that the current value for FOO is undefined. Now execute it with the appropriate flag to require dotenv:

The result is that FOO is now set to bar since the .env file has been loaded. If you want to learn more about dotenv, make sure to check out its documentation.

There’s also an alternative module based on dotenv to make loading environment variables more convenient. The result is node-env-run or nodenv. This command-line tool will load a .env file, initialize the values using dotenv, and then execute your script.

You can install it globally, but this is recommended only for development purposes and locally to the project. Install it by running:

Afterward, create a file nodenv-example.js and place this code in it:

As you can see, we don’t need to require anything here because it’s just the application logic. To try running it, use node:

This executed code should output “The value for FOO is: undefined.” Now try using node-env-run by running:

The result should be “The value for FOO is: bar” since it loaded the .env file.

Using node-env-run can override these existing values. To see it in action, first run the following command:

The command-line output should say, “The value for FOO is: foo.” If we now enable force mode, we can override existing values:

As a result, we should be back to the original “The value for FOO is: bar.”

If you want to use this tool regularly, I recommend that you wrap it into an npm script by adding it in the package.json like so:

This way, you can simply run:

If you want to learn more about node-env-run, make sure to check out its documentation.

There are also scenarios where it’s useful to check the value of an environment variable before entering the Node.js application in npm scripts. For example, if you want to use node-env-run when you’re in a development environment but use node when you’re in production mode. A tool that makes this very easy is if-env. Install it by running:

Make sure to not install it as a “dev dependency” since we'll require this in production as well.

Now simply modify your npm scripts in your package.json:

Try it out by running:

If you want to learn more about if-env, make sure to check out its documentation.

How to install npm on a Mac

Usually, this will install as part of the above installation. You can check this by running the npm command in the terminal. If it did install, you’ll see a usage list. If not, you’ll have the following:

To install npm, run the following:

Next up is debugging time. One strategy that helped me out a lot is using the DEBUG environment variable to receive more verbose logs for numerous modules. Take, for example, a basic express server like this:

And start it up with the DEBUG variable set to *:

You’ll receive extensive logging that looks something like this:

The magic behind it is a lightweight module called debug, and its usage is super easy. When you want to use it, all you have to do is initialize it with a namespace. Afterward, you can log it to that namespace. If someone wants to see the output, all they have to do is enable the namespace in the DEBUG variable. In this case, express uses a bunch of sub-namespaces. So if you would want everything from the express router, all you have to do is set the DEBUG with the appropriate wild card:

If you want to use debug in your own module, first you have to install it:

Afterward, it can be applied in the following way:

If you want to learn more about debug, make sure to check out its documentation.

Now use all the Node.js environment variables in Node.js