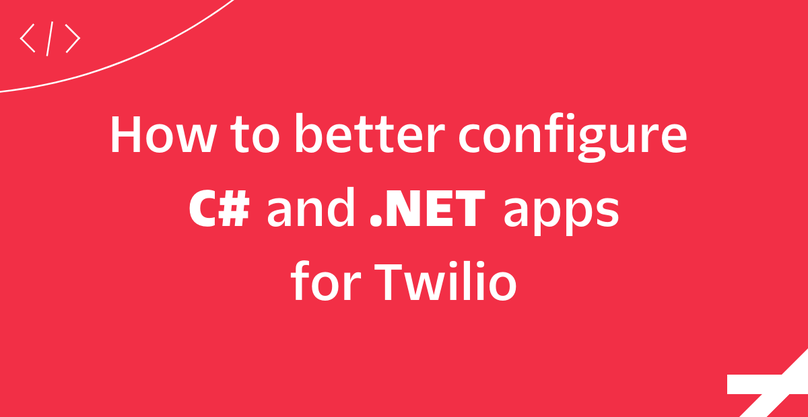 There are a hundred different ways to provide configuration to your applications. For almost any programming language, you can use environment variables and .env files, but configuration can also be stored in other file formats like JSON, YAML, TOML, XML, INI, and the list keeps on going. Though, in some scenarios configuration isn't pulled from files, but instead is pulled from a service like Azure Key Vault, HashiCorp Vault, or a similar vault service. It is rare that your configuration will come from a single source. Luckily, there are APIs in .NET that can help you grab configuration from multiple sources and merge them together.

In this tutorial, you'll start with an application that sends text messages using Twilio Programmable SMS, where the configuration is fetched directly from the environment variables. You'll then refactor the app to

You will need these things to follow along with this tutorial:

Get Your Twilio Configuration

You'll need some configuration elements from Twilio to send text messages from the C# application. Open the Twilio Console in your browser and take note of your Twilio Account SID, Auth Token, and Twilio phone number located at the bottom left of the page. 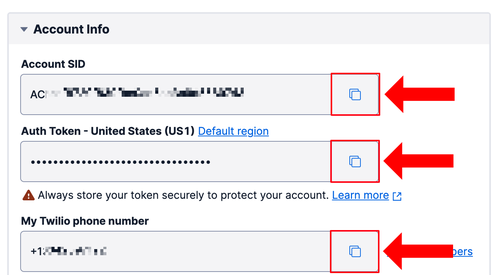 For any of the upcoming commands and code, replace the following placeholders like this:

Get configuration directly from environment variables

To get the project up and running quickly on your machine, open your preferred shell, and use the following git command to clone the source code:

The application pulls the Twilio Account SID, Auth Token, Twilio Phone Number (FromPhoneNumber), and the recipient phone number (ToPhoneNumber) from the environment variables, then uses the credentials to authenticate with the Twilio API, and then sends a text message saying "Ahoy!".

The application uses the Twilio SDK for C# and .NET to authenticate with Twilio and send SMS. The Twilio NuGet package has been added into the project as part of the source code you cloned. You can find this dependency in the csproj-file.

If you're using Bash or a similar shell:

If you're using PowerShell:

If you're using CMD:

Once the environment variables have been set, you can run the project using the following .NET CLI command:

The application will send an SMS from your Twilio Phone Number to the recipient phone number saying "Ahoy!".

This is why in Twilio samples, we will always use environment variables. Although it's an extra step compared to hard coding configuration, it is the fastest way to get you up and running with Twilio products.
But in .NET, there's a better way to retrieve external configuration, using the ConfigurationBuilder.

To start using the configuration APIs, update the Program.cs file with the following code:

The optional parameter specifies whether or not the application should throw an exception if the underlying source is missing. The reloadOnChange parameter specifies whether or not to update the configuration when the underlying source changes. For example, if there's an issue in your production application, but for performance reasons, the logging level is set to Warning in appsettings.json, you can change the logging level to Debug. Once you save the file, the application begins writing logs from the Debug level and up, without having to restart your application!

Now that the application loads configuration from multiple sources, in which source should you store configuration? It depends on the configuration, your use-case, and personal preference:

The appsettings.json file will provide the Message:From and Message:Body configuration, even though it would also make sense to pass this configuration in as command-line arguments.

By default, in a console app, the appsettings.json file will not be copied to the output of the project. As a result the configuration provider will not find the underlying source, which means the configuration in your JSON will not be loaded. To make sure the the appsettings.json file is copied to the output, add a Content node to the csproj-file as shown below:

To start using the Secret Manager, you first need to initialize it for your project using the following command:

Now you can set the Twilio:AccountSid and Twilio:AuthToken configuration like this:

There's only one configuration element left to configure, Message:To. Instead of configuring it using one of the previous sources, run the project using the .NET CLI and pass it in as a command-line argument:

Just like before, the recipient will receive a text message, but now saying "Ahoy from JSON!".

Run the command again, but overwrite the Message:Body configuration using a command-line argument:

Now the recipient will receive an SMS saying "Ahoy from the CLI".

Some operating systems and shells may not allow you to use colons. In that case, you can use a double underscore __ as a separator, and .NET will replace it with the colon for you.

To starting binding configuration, add the Microsoft.Extensions.Configuration.Binder NuGet package with the following command:

Update the Program.cs file with the code below:

If you run the project now, you will continue to get the same result:

If you want the same configuration, logging, and dependency injection from the web host builder, but not the web related functionality, you can use the Generic Host instead of the Web Host.

In Program.cs, Replace the using statements and the ConfigurationBuilder code with the following code:

The default Generic Host will build configuration similarly to how you did it yourself, but there are some differences. You can find an overview of the Generic Host defaults in the Microsoft Documentation.

The default Generic Host builds configuration slightly differently. More specifically, your user secrets will only be loaded if the Environment is configured as Development. There are multiple ways to configure the environment, but for this tutorial, pass in the Environment argument when you run your project, like this:

Get configuration from dependency injection using the options pattern

Now that you're using the Generic Host, you can start using the dependency injection (DI) that comes with it, just like you can on ASP.NET applications.

Replace your existing code in Program.cs with the following code:

You can use the ConfigureServices method on the host builder and pass in a lambda to add more services to the DI container. In this lambda, the Twilio and Message configuration sections are added as configuration using services.Configure<YourOptions>. As a result, your configuration will be injected wherever DI is supported by adding a parameter of type IOptions<YourOptions> to your constructor or method signature. Microsoft calls this the Options pattern.

In addition to IOptions<T>, there's also IOptionsSnapshot<T>, IOptionsMonitor<T>, and IOptionsFactory<TOptions> which each have different behavior and use-cases. Learn more about the differences between these options interfaces at Microsoft's documentation.

After configuring the options, the program will add the MessageSender class to the CI container. MessageSender is a new class that will be responsible for sending SMS.

Now that the DI container has been built, you can retrieve the services from it. So now you can get the TwilioOptions using host.Services.GetRequiredService<IOptions<TwilioOptions>>().Value. You can also have your TwilioOptions injected anywhere that supports DI. After retrieving the TwilioOptions object, it is used to authenticate with Twilio.

Then, the code will retrieve an instance of MessageSender from the DI container, which is used to send an SMS using the ​​SendMessage method.

When MessageSender is created by the DI container, the container injects an instance of IOptions<MessageOptions> into the constructor of MessageSender. MessageSender grabs the message options using the .Value property and uses it in the SendMessage method to send an SMS.

You're currently using the static TwilioClient class to authenticate and send messages, but you could add the TwilioRestClient to your DI container and start using that client to make Twilio API calls. Your projects will be easier to test when you avoid using static classes and methods and also use DI.

The fastest way to get started with the Twilio API, is to use your Account SID and Auth Token, but there's a better way to authenticate. Twilio recommends creating an API Key, and using the API Key SID and Secret to authenticate. Learn how to strengthen your Twilio Authentication by using sub accounts and API Keys in this tutorial. Once you have created an API key, update the authentication code and TwilioOptions in the Program.cs file like this:

Now your application supports authentication with both Auth Tokens and API Keys, and you can easily switch between the two types of credentials. You do have to configure these new options, which you can do like you've done before with the Auth Token and Account SID. To specify the CredentialType option, you can use any configuration source and set the configuration value to "ApiKey". For example, this is how you specify the CredentialType in appsettings.json:

After configuring the ApiKeySid, ApiKeySecret, and CredentialType, the application should continue to work as before using the recommended API Key credentials.

You went from approximately 6 straightforward lines of code, to approximately 25 lines of code with classes, interfaces, lambda expressions, generic types, and more. (Count excludes usings, brackets, whitespace, and API Key code.)
Why complicate the code so much?

For a small sample where you want to go from point A to point B as fast as possible, you can use environment variables and be done with it, but for real-world applications, although it requires extra setup, the techniques from this tutorial will decrease the amount of code you need to write and increase the flexibility and maintainability of your solution.

After following this tutorial, you have a learned how to use .NET's configuration APIs to:

Congratulations on making it to the end of a long post about configuration! 👏
You can start including these techniques for Twilio, SendGrid, or really any .NET applications! If you run into any problems, you can refer to the source code for this tutorial on GitHub, or you can submit an issue on the GitHub repository. In addition to the end result, you can find each step in a separate branch (Step 1, 2, 3, 4, 5, and 6)

Let me know what you're working on. I can't wait to see what you build!

Niels Swimberghe is a Belgian American software engineer and technical content creator at Twilio. Get in touch with Niels on Twitter @RealSwimburger and follow Niels’ personal blog on .NET, Azure, and web development at swimburger.net.

Dockerize your SQL Server and use it in ASP.NET Core with Entity Framework Core

Learn how to use Docker containers to containerize your SQL Server database to quickly develop ASP.NET Core application with Entity Framework Core, without bulky and complex SQL Server installations.

How to test web applications with Playwright and C# .NET

Learn how to use Azure Functions with HTTP triggers and binding to respond to Twilio webhooks with TwiML using C# .NET.

Use XML Literals in Visual Basic .NET to generate TwiML

How to generate TwiML using Strings in C#

Learn how Twilio uses webhooks and TwiML to give you control over how to respond to a call or text message. You can generate TwiML using strings in many ways, and with C# 11 you can now also use Raw String Literals.

Use Raw String Literals to generate TwiML in C# 11

Learn how Twilio uses webhooks and TwiML to give you control over how to respond to a call or text message. You can generate TwiML in many ways, and with C# 11 you can now also use Raw String Literals.