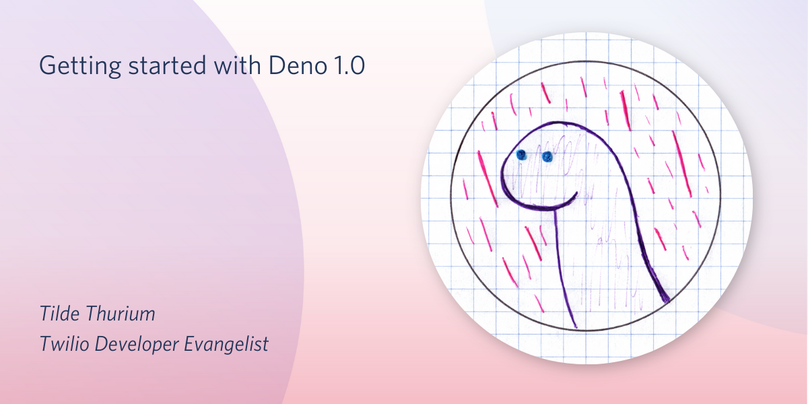 Since 2018, the creator of Node.js has been working on a new JavaScript runtime called Deno that addresses some of the pain points he had identified. Deno’s features include:

Check out this blog post for a full overview of Deno’s features and how it compares to Node.js.

Deno 1.0 was just released. What better time to dive in? In this post we’ll get started with Deno by building a small project.

When I’m learning a new framework or language, I try to find a Goldilocks project. That is, not too hard, not too soft, somewhere between “hello world” and production ready code.

Let’s write a Deno script that sends you an SMS affirmation. In order to do that we'll use Deno to:

We’ll be writing TypeScript since Deno has fantastic TypeScript support out of the box. If you are unfamiliar with JavaScript or haven’t used a typed programming language, you may want to read up on TypeScript basics.

First we need to install Deno. Instructions vary depending on your operating system.

Mac and Linux folks: if you’re a Homebrew user, you can brew install deno. If not, try running curl -fsSL https://deno.land/x/install/install.sh | sh.

Windows users can run iwr https://deno.land/x/install/install.ps1 -useb | iex or choco install deno if you use Chocolatey.

To verify that the installation was successful, try running deno --help from the command line. If you have trouble with installation check out the official Deno docs.

As is traditional, we’ll write a Hello World script to ensure we can execute code. Add a new file in the top level directory of your project. Call it “send-affirmation.ts”. Copy the following code into it:

Run the file with deno send-affirmation.ts on the command line. It should print the “Hello world!” text with some bold colors.

Reading a file with Deno

I know, I know, it’s a little contrived to put the affirmations in a file just so we can use the file-reading API. Since the goal is learning it’s okay to add a bit of unnecessary complexity.

Add a file  called affirmations.txt at the top level of your project directory. I copied the first ten from affirmations.dev but feel free to create your own.

Replace the  code in send-affirmation.ts with the following:

A lot of this isn’t too different from plain ol’ TypeScript. At a high level, we are:

If we try to run the script with the previous command, we get an error response of

Deno’s security model requires you to specify exactly which permissions your module needs. You can run deno run --help to see an explanation of the permissions model and all available flags.

This is a huge improvement over Node.js, which allows reading your hard drive, making requests, and all kinds of other potentially sketchy activities by default. Also, it’s great that Deno’s error message tells you exactly how to fix it.

Execute your script by adding the allow-read flag, like so:

Which should get you the following output:

Deno compiles your TypeScript files for you, without you having to do anything. Which is why the Compile file… line is only printed after you run a file that has changed.

Unlike Node.js, there is no centralized Deno package manager. Decentralization is bound to be one of Deno’s most controversial design decisions.

Does decentralization make Deno less secure than Node.js? It depends. If you’re using npm 6.0 or above, you can run npm audit to get a list of known vulnerabilities in your dependencies. Deno has no such functionality. npm audit only helps to a point, because unknown vulnerabilities are unknown. At the end of the day, neither npm or Deno are the Apple Store -- with both you’re running code that is fundamentally untrusted. IMO Deno is more secure, because at least Deno requires explicit permission for potentially sketchy activities like reading your hard drive.

Deno modules can be imported from any URL, and they’re cached on your hard drive on the first run. You can read the list of “official” 3rd-party Deno packages here. Or, you can search on Pika for Deno-compatible Node modules.

If we search Pika for the Twilio Node.js SDK, we get Package found! However, no web-optimized "module" entrypoint was found in its package.json manifest.

The Twilio API uses basic auth, which requires base 64 encoding. We’ll need to use a third-party Deno module for that. To import the base64 library, add the following code at the top of send-affirmation.ts:

To do Twilio things, you need your account SID and auth token which are found on the Twilio console. You don’t want to commit these values in code, because if you push them to a publicly accessible repository an attacker could use these credentials to do bad things with your account. Set these values as environment variables instead.

To double check that your environment variables are stored correctly, add the following code to the bottom of send-affirmation.ts:

To run this code we'll need to add another flag to enable reading environment variables. From the command line, run deno run --allow-read --allow-env --send-affirmation.ts to validate that the variables you just added have been set correctly. Make sure to delete this console.log statement afterwards to not expose your credentials in your logs accidentally. Making a POST request in Deno In addition to the account SID and auth token, the Twilio API requires a phone number to send to and from if you're sending a text message. Copy this code into send-affirmation.ts and replace the phone numbers with the ones you want to use.

Next we’ll add a new function to make the request to the Twilio API.

Deno uses the same API as the fetch method that’s built in to the browser. Having to rely on third-party packages for basic functionality is one of JavaScript’s biggest frustrations. Thanks Deno developers for having a sensible standard library!

Yeah I know, this is a lot of params and some of these could be defined inside the function. At the same time, I prefer to pass in args because it makes it easier to write unit tests. Not that I'll be writing unit tests for this code, but it's the principle of the thing. 😆

Inside the sendTextMessage function body add the following code to encode Twilio credentials.

We’ll finish out our function by actually making the API call.

x-www-form-urlencoded requires URL-encoded params in the request body. To the URLSearchParams mobile, Batman!

Of course, we actually need to call the function.

You can see the entire script on GitHub.

To run this script, we need one more command line argument to allow the script to make network requests.

From the command line, run:

You should receive a text message containing one of the affirmations. Well done! 🦕🎉

Today you have learned a few things about Deno, like how to:

Are you building something cool with Deno? Tell me about it! Hit me up on Twitter or over email (tthurium {at} twilio {dot} com).