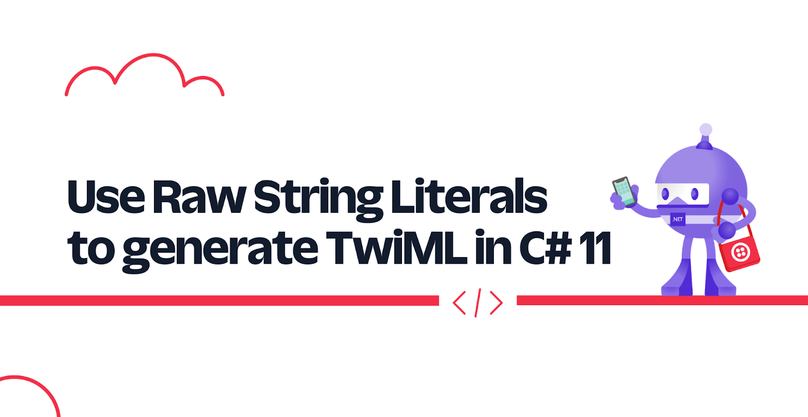 Before creating your application, let's get you up to speed on how Twilio uses webhooks and TwiML to respond to text messages and voice calls.

Using Twilio, you can build programmatic text message and voice call applications. Twilio can do a lot of things like playing audio, gathering input, and recording a call, but Twilio doesn't know what you want to do in response to voice calls and text messages. That's why when Twilio receives a call or text message, Twilio will send an HTTP request to your application asking for instructions.

A webhook is a user-defined HTTP callback. When an event happens in a service, your application is notified of that event using an HTTP request.

Twilio uses webhooks heavily throughout all its products. Here's a diagram of what it looks like when there's an incoming text message to your Twilio Phone Number and your application is handling the messaging webhook:

When your Twilio Phone Number receives a text message, Twilio will send an HTTP request with the message details to your application. Your application then has to respond with TwiML (Twilio Markup Language) to instruct Twilio how to respond. TwiML is XML with special tags defined by Twilio to provide instructions on how to respond to messages and voice calls. In the diagram depicted above, Twilio will respond with "Hi!" because the app responded with the following TwiML:

Now that you know what webhooks and TwiML are, let's create a voice call application with ASP.NET Core.

These commands will create the project in a folder named TwimlRawStringLiterals and navigate into the folder.

Open the project in your editor, and update the Program.cs file with the following C# code:

When your Twilio Phone Number receives a call, Twilio will send an HTTP GET request to the /what-does-the-fox-say endpoint, which will set the content-type response header to application/xml, and return the following TwiML in the response:

Take note of how the <Response> node and everything in it is indented with a tab too much.

When Twilio receives this TwiML, Twilio will convert "You said: ring ding ding" to speech and stream the audio to the caller.

In case you're not familiar with the song I am referencing in this app, "What does the fox say?" originates from this famous song.

Start your .NET application using your editor or using the terminal using the .NET CLI:

Before integrating Twilio, open a browser and navigate to your web application URL with the suffix /what-does-the-fox-say to verify the TwiML that is generated.

To start ngrok, run the following ngrok command in a separate terminal:

Replace [YOUR_ASPNET_URL] with the localhost URL from your .NET application. If you're using an HTTPS localhost URL, you'll need to authenticate ngrok. The ngrok command will display an HTTPS Forwarding URL that makes your local web server public. 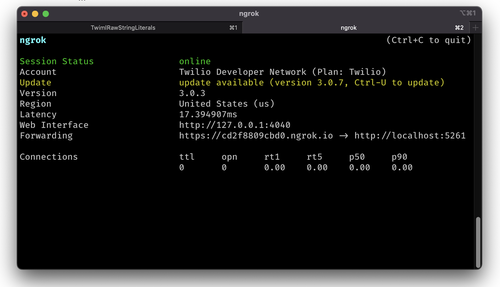 Go to the Active Phone Numbers section in the Twilio Console and click on your Twilio Phone Number.
This will take you to the configuration for the phone number. Find the Voice & Fax section and under the "A CALL COMES IN" label, set the dropdown to "Webhook". In the text field next to it, enter your ngrok forwarding URL with /what-does-the-fox-say appended to it. Select “HTTP GET” in the last dropdown. Finally, click the Save button at the bottom of the page.

Test that the application works

To test out your application, call your Twilio Phone Number. You should hear the question "What does the fox say?" which you can respond to, wait 5 seconds, and then your response will be read back to you.

After you've done that, stop your application using your editor, or if you're using the terminal, press ctrl + c.

C# 11 is still in preview, but you can try it out today using the .NET 7 previews. Make sure you have .NET 7 installed and are using .NET 7 in your project. Then, open your project file at TwimlRawStringLiterals.csproj and add the <LangVersion>preview</LangVersion> to the first <PropertyGroup> node. This will enable the C# 11 preview features.

The syntax highlighting may be off in the next snippets and snippet above because the blog doesn't have C# 11 highlighting yet.

Raw String Literals also makes it easier to format your strings. Take the following method that generates a Verbatim String (@) as an example:

The resulting string will be:

Let's take a look at the Raw String Literal version:

The unnecessary newlines and tabs are gone. The way Raw String Literals indent your strings depends on where you place the starting and ending double quotes, and also how you indent the content of your string. It's a little funky and hard to explain all the variations, so I recommend experimenting with it and reading the Microsoft documentation on Raw String Literals to learn more.

Using this knowledge, you can apply Raw String Literals to your endpoints like this:

Now the resulting TwiML will be readable and not contain unnecessary newlines and tabs.

Other ways to generate TwiML

In the terminal where you ran your project, run the following commands to add the Twilio package and Twilio.AspNet.Core package:

Then, update the Program.cs file with the following code:

The resulting TwiML will be the same as before. Notice, however, that you don't need to use the SecurityElement.Escape anymore to escape the user input, because the Twilio helper library will XML encode it for you.
Under the hood, the helper library uses the APIs from System.Linq.Xml to generate the XML string which will also do the formatting for you.

The advantages of creating TwiML using strings, is that you don't need any dependencies and it's more memory efficient & performant. However, it is easier to make a mistake in your TwiML and there will be no compilation errors to prevent you from doing that. You also have to XML escape user input yourself to protect yourself from XML injection.

The advantages of using the Twilio helper library are that you are using fully typed objects and methods that provide IntelliSense in IDEs. If you make a typo, your project will not build and you will receive a compiler error telling you where your typo is. However, you do depend on the Twilio helper library and its dependencies, and you have to create a bunch of objects that are ultimately serialized to an XML string which is less memory efficient and slower.

They both have their own advantages and disadvantages, but you can mix and match based on your use case.

You learned how Twilio uses webhooks and TwiML to give you control over how to respond to a call or text message. You then learned how to generate TwiML instructions using C# 11's new Raw String Literal feature, and compared it to generating TwiML with the Twilio helper library.

Here are a couple more resources to further your learning on Minimal APIs and Twilio:

We can't wait to see what you build. Let us know!

Niels Swimberghe is a Belgian American software engineer and technical content creator at Twilio. Get in touch with Niels on Twitter @RealSwimburger and follow Niels’ personal blog on .NET, Azure, and web development at swimburger.net.

How to build a URL Shortener with C# .NET and Redis

Learn how to build a link shortener using C#, .NET, and Redis. You'll be using ASP.NET Core to build the URL forwarder and the System.CommandLine libraries to manage the data.

Dockerize your SQL Server and use it in ASP.NET Core with Entity Framework Core

Learn how to use Docker containers to containerize your SQL Server database to quickly develop ASP.NET Core application with Entity Framework Core, without bulky and complex SQL Server installations.

How to test web applications with Playwright and C# .NET

Learn how to use Azure Functions with HTTP triggers and binding to respond to Twilio webhooks with TwiML using C# .NET.

Use XML Literals in Visual Basic .NET to generate TwiML